Maybe one  of the most classic entrances in wrestling history (imo) and one of the most interesting comebacks as of recent years,  Shane McMahon is back home in WWE after being gone from the product for almost a decade. 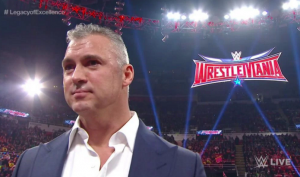 The big question is why is Shane O’ Mac back, just in time for Wrestlemania I might add.  Well my first guess is that because the company is attempting to break their all time attendance record this year in Dallas and perform in front of over 100,000 people.  It has become an even more daunting task for the corporation since approximately 10 of their top superstars are plagued with injuries right now.  Creating a little bit of desperation to dig deep in to the bull pen of who they can suck back in to the ring.  Unfortunately for me this hinders my excitement a little for Shane’s return because it certainly doesn’t feel natural.

That being said I have always liked Shane as a character as well as a performer.  He has done some pretty impressive stuff in the ring in his career against some of the best and is as good of a worker as you could ask for from an Executive.  Check out his famous coast to coast dropkick:

On top of moves like this he has quite an array of acrobatic feats including some magnificent jumps from dizzying heights, to elbow drops from the turnbuckle to the announcers desk (a move only Shawn Michaels has made look as good), to being tossed through a couple plate glass windows at the hands of Kurt Angle.  Shane is all around impressive in my eyes and I am glad to see him back.

What discourages me slightly is the story line in which they brought him back.  He wants control of Monday Night Raw, out of the blue just like that, and Vince had an answer right away even though he was totally surprised by his son’s return HAHA.  Either way Shane vs the Undertaker at Wrestlemania should be a match that will deliver good fun as both men though older still appear to be in great physical shape, and Shane though not a current roster member, at least brings back a little more fresh air than some of the other retired wrestlers they keep pulling from the wreckage to boost their numbers.  My question is this though, what if he wins?  First off the Undertaker’s streak has been broken so a loss no longer carries the same impact for Taker’s character.  So the realm of possibility is there that Taker could lose and not be hurt too much by it, but my impression was that Shane was finished with this business for good.  So if he beats Taker and gets control, is he going to be around for a while?  Will he be involved again?  If not then this is just a ploy to get ratings up going in to Wrestlemania and then we will not see Shane again for quite some time.  If that’s the case, if this story does not have some sort of long term payoff then I will be extremely disappointed. 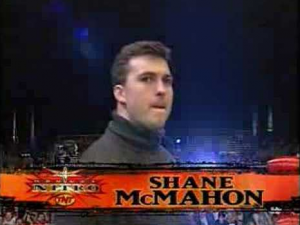